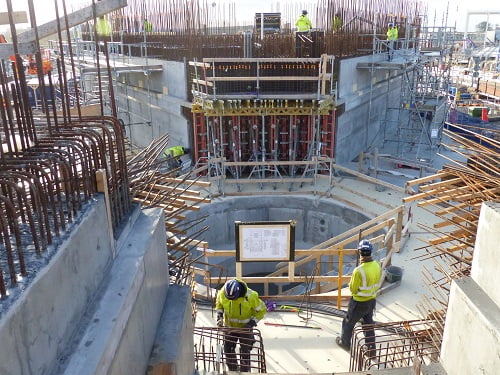 Using MagnaDense in the construction of one part of the research facility ESS saved 1,100 tonnes of CO2 emissions for the building, reducing 28% compared to using standard aggregates.

European Spallation Source (ESS) is a multi-disciplinary research facility based on the world’s most powerful neutron source under construction in Lund, Sweden. When producing neutrons for research in the spallation process, ionising radiation will be generated. MagnaDense contributed to providing the radiation protection that is therefore required in parts of the facility.

Skanska used 14,000 tonnes of MagnaDense as aggregate, primarily as radiation protection, but calculations showed that this solution also contributed to the sustainability goals.

The calculation results highlight the benefits of using heavy minerals in the concrete. The savings in carbon dioxide emissions were as much as 1,100 tonnes for the construction, which was 28 per cent lower than it would have been if ordinary aggregate had been used.

“ESS will not only become a world-leading research facility. It will also be one of the most sustainable and energy-smart facilities”, tells David Lindblad, technology and business developer at LKAB Minerals. This unique research facility has set high sustainability goals, and the contractor Skanska has taken many sustainability measures during construction.

“We were surprised by the positive outcome when using MagnaDense in comparison with traditional aggregate”, says David Lindblad.

The transport from Kiruna to Lund burdened the calculation for the solution with MagnaDense, but this was offset by the smaller amount of both cement and rebar (reduction by 800 and 550 tonnes, respectively). This means only half the amount of concrete! With the choice of MagnaDense, the climate footprint became lower. And it was not the mechanical strength of the construction that set a minimum dimension but the requirements for radiation protection.

“The calculation results highlight the benefits of using heavy ballast in the concrete”, explains David.

What would have happened if another standard rock aggregate had been chosen with a lower CO2 footprint than MagnaDense? The answer is that the significant gain in environmental impact is not from MagnaDense itself but the gains you get from a construction with a higher mass. In this case, the major environmental benefits were that you could halve the amount of concrete, which is very climate-affecting with its cement content.
With half the amount of concrete, the amount of reinforcement could also be reduced. As is well known, steel and cement are two drivers of carbon dioxide emissions in the construction industry, and this shows that you can optimise your design with simple means.

LKAB Minerals commissioned an Environmental Product Declaration (EPD) for MagnaDense 8s and 20s (different sizes). EPDs are becoming increasingly important in construction projects. They use environmental data to compile the environmental impact of embedded products, including climate footprints, to carry out life cycle analyses for the completed construction.

Reduced CO2 achievable in many constructions

The radiation protection at ESS in Lund was constructed with heavy concrete, which has a higher mass than ordinary concrete. A higher mass also gives less volume, which reduces the need for cement and results in a lower climate footprint. A solution that will benefit many constructions, not only projects where there is a need for radiation shielding.

LKAB Minerals manufactures heavy aggregate from magnetite ore using the MagnaDense brand name. This dense mineral is added to create this particular concrete which has a higher density than traditional concrete. Typical applications for heavy concrete include radiation protection in hospitals, research facilities and nuclear solutions. However, the industry also uses it in more common constructions such as counterweights in bridges and tunnels or other foundations with high groundwater pressure. Due to the increased weight of MagnaDense concrete, more technical and maintenance-intensive solutions such as anchor struts and the like can be avoided. And with less concrete volume, cement consumption will also be lower.